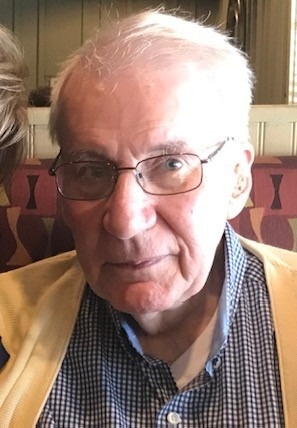 Robert G. Connors, 94, died June 30, 2022 at Shannondale of Maryville. Connors, who was born in Lakewood, Ohio was graduated from Ohio Wesleyan University with a Bachelor of Arts degree in 1949 and later received his Master of Science degree from Roosevelt University. He was a reporter for the Delaware (Ohio) Gazette from 1949-1953 and for the Columbus Dispatch from 1953-1957.  Connors joined Hart Schaffer & Marx, later Hartmarx Corporation, the Chicago apparel manufacturer, in 1957 as Public Relations Director.  In 1985 he joined the Chicago Apparel Center as their Director of Marketing.

He retired in 1991 and moved from Aurora, IL the following year with his wife Helga, whom he married in 1957, to Durham, NC.  They then moved to Clemson, SC in 2001. Connors and his wife moved to Maryville, TN in 2007 to reside in the Shannondale of Maryville retirement community.  Connors is preceded in death by his wife Helga.  He is survived by his daughter Lisa Daley of Knoxville, TN and husband Dr. Brian Daley; three grandchildren, Andrew (married to Lee Wilson), Sara and Patrick, and 2 great grandchildren, Joseph and Blair.  The family would like to thank the staff of Shannondale of Maryville for all their loving care! A private memorial service will be held at a later date. In lieu of flowers, the family suggests donations to the Community Food Connection of Blount County, P.O. Box 786 Alcoa, TN 37701 or Ladies of Charity Knoxville, 120 W. Baxter Ave.  Knoxville, TN. 37917. Smith Funeral & Cremation Service, Maryville, 865-983-1000, www.SmithFuneralandCremationService.com.

To order memorial trees or send flowers to the family in memory of Robert Glennar Connors, please visit our flower store.