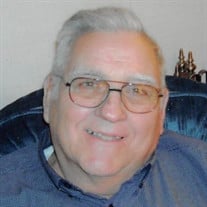 William Kenneth “Footsie” Keeble, 87, passed away Tuesday, February 16, 2021. He was a member of Axleys Chapel UMC. Kenneth was born January 22, 1934. He grew up in Blount County and graduated Everett High in 1952. He married Maxine Tallent Keeble, who was his wife for 48 years until her death in 2002. Kenneth was Chief Deputy of Blount County in the mid-1960s. He then went to work for National Electric Coil and retired in 1999 to become a full-time farmer. In 1970, the family moved to the Glendale Community in Loudon County. Kenneth was a former Chief of the Glendale Volunteer Fire Department and was affectionately called the “Mayor of Glendale”. On June 9, 2007, he married his bride of 164 months, Emma Lu Kerekes. They lovingly celebrated their anniversary the ninth of every month, as marrying at an “advanced age” they wouldn’t have many years to celebrate. Footsie was a world-class storyteller who never met a stranger. When meeting someone new, his first question was always, “Say, are you from around here? What’s your last name?” And then he could nearly always make a connection to someone he knew. “Footsie” will be greatly missed by all Blessed to have known him. Preceded in death by his wife, Maxine; son, Charles “Chuck” Keeble; parents, William Sr. and Onie Kirby Keeble; brother, Carl “Bud” Keeble. He is survived by his wife, Emma Lu Kerekes; son, William “Keny” Keeble; daughter, Beth (Roger) French; sisters, Ruth Durham and Clara Jean Keeble; grandson, Tanner French; granddaughter, Heather Keeble; great- granddaughter, Keilei Goins. Friends may stop by the funeral home to sign the book and pay their respects from 12:00 until 5:00 PM Saturday, February 20, 2021 and 9:00 AM until 12:00 PM Sunday, February 21, 2021. Family and friends will assemble at 3:00 PM for Graveside Service and Interment Sunday, February 21, 2021 at Grandview Pavilion, 2316 Graves Road, Maryville, TN 37803. Smith Funeral & Cremation Service, Maryville, 865-983-1000, www.SmithFuneralandCremation.com.

The family of William Kenneth Keeble created this Life Tributes page to make it easy to share your memories.

Send flowers to the Keeble family.