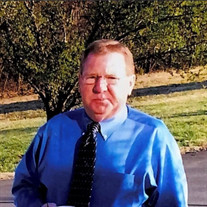 Ronald (Ronnie) L. Swicegood of Trigonia, TN, 77, passed away February 3, 2021. He was born in Athens, TN and graduated from Lanier High School in 1962. After graduation, Ronnie enlisted in the United States Marine Corp and was stationed at Paris Island in Beaufort, SC as well as spending a year in Okinawa. In 1964, Ronnie married his high school sweetheart and lifelong partner, Rosalita (Rose) Brewer. While in Beaufort, Rose gave birth to a son, Ronald (Ron) in 1965. After his USMC service, they moved to St. Petersburg, FL and then to Huntsville, AL where they welcomed their second son, Richard (Ricky) in 1967. Next in Memphis, TN, they added daughter Rosanne (Rosy) to the family in 1973. In 1976, the family moved to Maryville, TN and began working for Federal Express in 1983. He worked there for over 20 years. Ronnie was well respected at FedEx for his work ethic and maintains an extensive list of friends from that time, many of which he endorsed to help get a job. Upon retirement, Ronnie & Rose built a home and moved to Trigonia, TN on the property where he grew up as a young boy. It was his dream to live on this property. He truly loved calling Trigonia his home. Ronnie & Rose loved their family immensely and hosted Sunday Dinner after church every week. Ronnie took great delight in attending every grandchild’s play, sporting event or special program. Ronnie became Papaw upon the arrival of their close friend’s children Megan and Matthew in the 1980’s. From that point on, Ronnie was known as Papaw, a name that almost everyone in town called him for the rest of his life. Papaw had a remarkable gift with children. Both Papaw & Rose have been devoted followers of Christ their entire lives. This is evident in their upbringing and in the family they raised. During the last 44 years in Maryville, they were members of Eastside Church of Christ, Greenback Church of Christ and Maryville Church of Christ where they attended currently. Papaw was a Christian man who would pray, laugh, cry, and comfort. He was most certainly a man’s man. Ronnie is preceded in death by his father, Lloyd Leon Swicegood and mother Elsie Beulah (Hicks) Swicegood, and brothers Kenneth Wayne Brewer of Maryville and Richard Brewer of Pungo, VA. He is survived by his wife of 56 years, Rose of Trigonia, son Ron Swicegood of Trigonia, son Ricky and wife Debbie (Thompson) Swicegood of Trigonia, daughter Rosanne and husband David Pierce of Maryville. He also precedes ten grandchildren, Craig and Kayla Kalahar of Maryville, Andrew L. and Alexis Pierce of Greenback, Abigail R. Pierce of Maryville, Colton R. Swicegood of Trigonia, Megan Rupert and Cody Bock of Maryville, Matthew and wife Katie Rupert of Alcoa. He also loved three great grandchildren, Tanner and Tucker Kalahar of Maryville and Annie Rose Bradburn of Maryville. He leaves sisters Carol (Swicegood) Goforth of Maryville, Christy (Swicegood) Rauhuff of Friendsville, Sheryl (Swicegood) Underwood of Etowah, Annette (Swicegood) Williams of Maryville, brother Robin Swicegood of Athens, sisters Jo Ann (Long) Brewer of Dallas, TX, Betty Brewer of Maryville and Mary Brewer of Pungo, VA. He leaves behind an extensive family of nieces, nephews and cousins. Rose and the Swicegood family wish to thank everyone for the outpouring of love and support. The sheer volume of loved ones, friends and acquaintances who have reached out is a testament to the positive influence Ronnie had on people over the years. Due to the Covid restrictions, a private memorial service is planned. The family is very appreciative of the community’s support. In the interest of safety, Smith Funeral Home will arrange the register book to be open at the Maryville Church of Christ between 4:00 and 6:00 pm on February 9, 2021. In lieu of flowers, memorial donations may be made in Ronnie’s memory to World English Institute (WEI) via the Maryville Church of Christ. Please send donations to WEI, Attn: Tom Langley, P.O. Box 5293, Maryville, TN 37802. Smith Funeral & Cremation Service, Maryville, 865-983-1000, www.SmithFuneralandCremation.com.

Ronald (Ronnie) L. Swicegood of Trigonia, TN, 77, passed away February 3, 2021. He was born in Athens, TN and graduated from Lanier High School in 1962. After graduation, Ronnie enlisted in the United States Marine Corp and was stationed at... View Obituary & Service Information

The family of Ronald L. Swicegood created this Life Tributes page to make it easy to share your memories.

Send flowers to the Swicegood family.