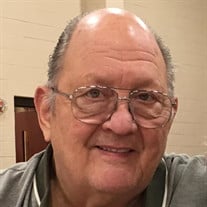 Ron Erickson was born in Detroit Michigan in October 1943. Ron was the 4th child of 13. He started his first job delivering newspapers at the age of 8 in Detroit and then Livonia, Michigan. He loved to read the newspaper everyday of his life. As a young man, he worked very hard and earned enough money to buy a 1965 Chevrolet Corvette to the envy of many young men. He served honorably in the US Air Force during the Vietnam war as an aircraft mechanic. He then served in the Peace Corps in Malaysia. When he returned home, he married Beth and they eventually had two daughters, Tonya & Dawn. Ron owned a gas station in southern CA but his deep concern for social issues led him to go back to school. He first served as President of Associated Students at Cerritos College then went on to earn a BA in Social Ecology from UC Irvine. Until his retirement in 2000, Ron dedicated both his professional and personal time to helping those impacted by mental illness. He earned numerous awards for his dedication, including serving on the board of Napa State Mental Hospital. When CA was wanting to reduce funding for mental health care in CA, Ron fasted for nearly a year to bring attention to how critical mental health services were to all citizens in CA. After retiring as the Director of Mental Health in Butte County, Ron enjoyed many years golfing and traveling with his wife Beth of 53 years. He also was the proud Papa of 5 granddaughters who he was able to see grow into lovely young women. Ron was preceded in death by his parents, Andrew and Sylvia Erickson; infant sister, Norma Jean Erickson; brother, Ellwood Erickson. Ron is survived by his wife, Beth Ann Craig Erickson; daughters, Tonya Marie Erickson Roschen (son-in-law Ethan Roschen) and Dawn Nicole Erickson Irion (son-in-law Van Irion); granddaughters, Kaiya Irion, Natasha Irion, Annaliisa Roschen, Lila Roschen and Brooke Roschen; his sisters and brothers, Eleanor Niska, Carolyn Erickson, Helen Bastion, Stanley Erickson, Dennis Erickson, Gary Erickson, John Erickson, Mary Kokkonen and Norman Erickson. Funeral Service will be held at 11:00 AM Wednesday, September 2, 2020 at Smith West Chapel with Pastor Keith Johnson officiating. Interment will be held at Sacramento Valley National Cemetery in Dixon, CA. Smith Funeral & Cremation Service, Maryville, 865-983-1000, www.SmithFuneralandCremationService.com.

Ron Erickson was born in Detroit Michigan in October 1943. Ron was the 4th child of 13. He started his first job delivering newspapers at the age of 8 in Detroit and then Livonia, Michigan. He loved to read the newspaper everyday of his life.... View Obituary & Service Information

The family of Ronald William Erickson created this Life Tributes page to make it easy to share your memories.

Ron Erickson was born in Detroit Michigan in October 1943. Ron...

Send flowers to the Erickson family.