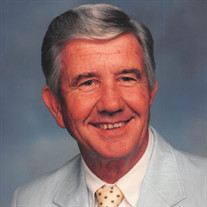 Randall R. Teffeteller, born December 28, 1930, passed away Thursday, July 1, 2021, after a lengthy illness. He was a local homebuilder operating as Grandview Developers over 40 years, being named the number one best builder in Blount County by the Reader’s Choice Awards the year he retired. He loved his profession, having begun in construction at age 18. He enjoyed all sports, especially fishing and basketball. He attended all home games of the men’s Tennessee Vols basketball team from the first games played in Thompson Boling Arena until his health would not allow his attendance. Randall was a faithful member of Peck’s Memorial United Methodist Church, joining as a teenager. His grandson and granddaughter, Neil and Leah McCammon, were the sixth generation of an unbroken line to be baptized in the church. He served on numerous committees and was responsible for a lot of the work it takes to maintain a building. Randall will be greatly missed by his survivors: wife of 67 years, Edna Teffeteller; son, Mike (Alisa) Teffeteller; daughter, Gay (Gordon) McCammon; grandchildren, Neil and Leah McCammon; great-granddaughter, Fionna McCammon; sister-in-law, Wilma Grigg; too many nieces and nephews to name, but they were very dear to him. Memorial donations may be made to Peck’s Memorial United Methodist Church, 2438 Wilkinson Pike, Maryville, TN 37803. Family will receive friends from 5:30 until 7:00 PM Monday, July 5, 2021, at Smith Trinity Chapel with the funeral service to follow with Pastor Brian Inman officiating. Family and friends will assemble at 1:00 PM for Interment Tuesday, July 6, 2021, at Grandview Pavilion. Smith Funeral & Cremation Service, Maryville, 865-983-1000, SmithFunerlandCremation.com.

Randall R. Teffeteller, born December 28, 1930, passed away Thursday, July 1, 2021, after a lengthy illness. He was a local homebuilder operating as Grandview Developers over 40 years, being named the number one best builder in Blount County... View Obituary & Service Information

The family of Randall R. Teffeteller created this Life Tributes page to make it easy to share your memories.

Send flowers to the Teffeteller family.