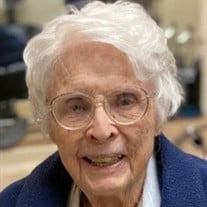 Phyllis Benson Hoffman, 102, died peacefully in her sleep on April 24, 2022 in Maryville, Tennessee. She was born to Dollie McDermot Benson and Garrett Henry Benson III, in Ewing, Nebraska, August 17,1919. She was preceded in death by her brother, Robert B. Benson, and by her husband of 58 years, Dr. Walter Knox Hoffman, Jr. Phyllis was graduated from Peru State Teachers College, and married her first husband, Robert M. Halliday USNR, in 1942. Tragically, six months later, the pilot and his plane were lost in the Atlantic, as memorialized in Battery Park, NYC. She found work during the war in San Francisco with the Army, and then in Honolulu, HI, at Queens Hospital; there she met her husband, Walter. Memphis,TN was their home for over 50 years, where he was a founding partner of The Medical Group, and together they raised a son and four daughters. As a teacher, Phyllis taught grammar, typing and physical education. She was a meticulous wordsmith and a witty poet. During the war in 1942, she coached the local high school football team when the men were deployed. A lifelong learner, Phyllis was a student of needlework and sewing, creating dresses, suits, dolls, and quilts. A true Tennessee Volunteer, she spent much of her time supporting local devotions, such as The Memphis Heart Association, Trinity United Methodist Church, St. Mary's Episcopal School, Memphis Athletic Club, Danny Thomas Memphis Classic, and the Memphis State Tigers. In her 80s she continued to volunteer with Crime Stoppers, handing monetary rewards to tipsters from the back seat of a patrol car. Her Hole-n-One on #3 at Colonial Country Club was a testament to her life-long luck. Phyllis is survived by her children: Dr. Philip Hoffman (Cindy) of Walland, TN, Debbie Hansen (Brian) of Littleton, CO, The Reverend Judi Hoffman (Matt Dennis) of Memphis, TN, Kristi Jones (Robert) of Virginia Beach, VA, and Kelley Hook (Bruce) of Downers Grove, Il; sister-in-law from Memphis, TN, Edna Hoffman; nephews Tom Hoffman (Evanthia) of Mammoth Springs, AR, Dan Hoffman, Jr. (Vicki) of Germantown, TN, and Joel Benson (Debra) of Sequim, WA, 9 grandchildren and 7 great grandchildren. The family extends their heartfelt gratitude to the loving staff of Morning View Village Assisted Living, Maryville, TN, for their unmatched care and friendship with Phyllis throughout her nearly 13 years there, and to Blount Hospice for their compassionate care. Family and friends will gather for a celebration of Phyllis’ life on Thursday, May 26 at 11:00 am at Grandview Pavilion. Inurnment will be private at Grandview Cemetery. In lieu of flowers, memorial gifts may be sent to: Logan's Chapel UMC, 4626 Logans Chapel Rd., Maryville, TN, 37804, or John 3:16 Outreach Ministry, PO Box 5301, Maryville, TN 37802. To send flowers or a memorial gift to the family of Phyllis Benson Hoffman please visit our Sympathy Store.
To order memorial trees or send flowers to the family in memory of Phyllis Benson Hoffman, please visit our flower store.