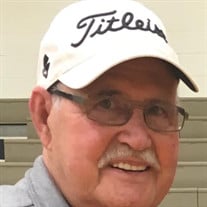 Oliver Clyde Roberts, Jr., 79, born April 28, 1940, passed away peacefully on April 3, at Blount Memorial Hospital. Clyde Jr. was a direct descendant of the Oliver family of Cades Cove. His grandmother Roberts was one of the Oliver sisters who were raised on the Tipton-Shields farm. He was also one of two active members of Cades Cove Primitive Baptist Church before it was turned over to the National Park. Clyde retired from the Aluminum Company of America after 42 years working as a master electrician. He was a member of the 25-year Alcoa Club. He was a graduate of Everett High School. He had a natural ability to troubleshoot and resolve issues when others could not and loved cooking and baking. He was a tinkerer, a craftsman, and an avid outdoorsman. He and his wife, Sandy, traveled extensively upon retiring and enjoyed visiting faraway places around the world. More than anything else, Clyde loved to play golf and took every opportunity to do so with an awesome group of golfing buddies who were his best friends. He was a loyal Tennessee Volunteer having had season tickets to their football games for decades. Clyde had a deep love and conviction for southern gospel music and loved to sing. For many years, he sang with a gospel group and was strongly devoted to praising God and His Son through song. He led his church in singing for most of his adult life and loved doing so. He was a long-time member of Laws Chapel Primitive Baptist Church where he served an active member, faithful steward, deacon, and treasurer. He was a fierce disciple in maintaining the traditions and doctrine of the church, even as times would suggest doing otherwise. He loved his family and grandchildren. Many evenings of his last month here on earth were spent following his grandson Nick as he played basketball for Alcoa High School. He planned activities for his other grandchildren and enjoyed watching them grow up. Clyde, Jr. was preceded in death by his twin brother, Floyd Andrew, who died a few days after birth, his sister, Carol Kay Roberts, and his parents, Clyde Roberts, Sr. and Minnie Pauline Roberts. He leaves to mourn his passing, his wife of 53 years, Sandra Kay Whitehead Roberts, daughter Tammy Jo Roberts Knouff (Ritchie), sons Michael Todd Roberts (Kelly), Richmond Bradley Roberts (Teena), and grandchildren, Jaqueline Knouff, Nick and Natalie Roberts, and Griffin and Macy Roberts. He also will be missed by his sister, Janice Roberts Livingston (Bill), Sisters-in-law, Jan Hill (Max), Connie Iorio and Karen McCarthy; nephews Joshua (Lesley) Livingston, Daniel (Kristal) Livingston, Caleb (Hannah) Livingston and Trent Hord; nieces, Kelly (Lee) Sellers, Michelle (Travis) Mullins, and Tracy Hord McDavid; numerous great-nieces and nephews and very special group of travel buddies with whom he spent a lot of happy days and shared memories. Due to the existing global pandemic, there can be no funeral at this time. The family will host a celebration of life at a later date because he would have loved getting together with family and friends. Smith Funeral and Cremation Service, Maryville, 865-983-1000, www.SmithFuneralandCremation.com.

Oliver Clyde Roberts, Jr., 79, born April 28, 1940, passed away peacefully on April 3, at Blount Memorial Hospital. Clyde Jr. was a direct descendant of the Oliver family of Cades Cove. His grandmother Roberts was one of the Oliver sisters who... View Obituary & Service Information

The family of Oliver Clyde Roberts Jr. created this Life Tributes page to make it easy to share your memories.

Send flowers to the Roberts family.