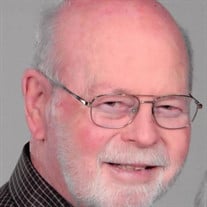 Norman (Norm) Forsythe, age 81 of Maryville, originally from California, passed away December 8, 2020. Norm was a loving son, brother, husband, father, and pop. He also had many dear friends that he considered family. He attended Loyola University until he was drafted to play Major League Baseball by the Philadelphia Phillies in 1959 and later finished his professional baseball career in 1964 as a pitcher for the New York Yankees. While he admitted that he never mastered a curve ball, he did master the art of telling a great story, particularly a great baseball story. He captivated friends and family with his days of playing catch with Yogi Berra and other adventures while on these teams. Norm was rarely seen without a smile and had a wonderful sense of humor. He loved traveling in his motor home, deep sea fishing, his church family, the taste of a fresh banana or key lime pie, and his grandkids; not necessarily in that order. He was an active member of Fairview United Methodist Church for 25 years and volunteered for many years for Meals on Wheels with his wife, Linda. He will be missed greatly by those of us lucky enough to have known him. Preceded in death by his wife of 39 years, Linda Forsythe; parents, Donald Charles and Anne Mary Forsythe; brother, Donald Forsythe Jr. and sister, Carolyn Williams. Survived by his son and daughter-in-law, Matthew and Kendra Forsythe and grandchildren, Mason and Cade Forsythe. Memorial contributions may be made in Norm’s name to Fairview UMC, 2508 Old Niles Ferry Rd., Maryville, TN 37803. A Funeral Service will be held Saturday, December 19, 2020, at 2:00 PM at Fairview United Methodist Church with Pastor Mickey Rainwater Officiating. Masks are required. Since a normal receiving of friends cannot take place, we’d love for you to share your stories and memories to his obituary on the website www.smithfuneralandcremation.com. Smith Funeral & Cremation Service, Maryville, 865-983-1000.

Norman (Norm) Forsythe, age 81 of Maryville, originally from California, passed away December 8, 2020. Norm was a loving son, brother, husband, father, and pop. He also had many dear friends that he considered family. He attended Loyola University... View Obituary & Service Information

The family of Norman Forsythe created this Life Tributes page to make it easy to share your memories.

Send flowers to the Forsythe family.