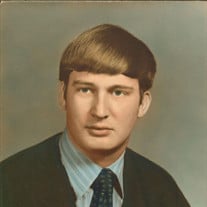 Michael Ernest Goddard was born March 25, 1949 to the union of Franklin Eugene Goddard and Edna Louise Perry Goddard, and passed away on Friday, November 5, 2021 after a 14 month struggle with pancreatic cancer. He has joined them in heaven along with his younger brother David who he had not seen since he was 12. He was born in Chattanooga, grew up in Rossville and also spent a few years in Alabama and Texas. He was a graduate of Lakeview High School class of 1967, University of Tennessee at Chattanooga Class of 1982 with a BS in Industrial Engineering. His union with Patricia Kerby Goddard began July 1, 1972. His work as an I.E. took him to Tampa, FL, Monroeville, AL, Martinsville, VA and to Maryville where he worked for Delta Apparel. Mike realized his dream of owning his own business, Added Value Services, Inc., in 1998 and closed his business in May 2021. He will be remembered for his unapologetic political stance and devotion to his family. He is preceded by: his grandparents, Guy & Myrtle Goddard & Patrick & Minnie Perry. Mike is survived by: wife, Patricia; siblings, Pat Hartline (Skip), Franklin (Joe) E. Goddard Jr. (Brenda), Ann Weed (Bill); beloved daughter, Adrian Jones (Josh); beloved grandchildren, Izabel, Anna Beth & Garrett Jones. In lieu of flowers, the family requests donations by made to: FCA, PO Box 7126, Maryville, TN 37802, Samaritan’s Purse, Operation Heal Our Patriots, PO Box 3000, Boone, NC 28607, or Smokey Mountain Service Dogs, 110 Tooweka Circle, Loudon, TN 37774 in memory of Michael. A Celebration of Life and Reception will be from 5:00 until 7:00 PM, Thursday, November 11, 2021 at Life Event Center, 1410 Tuckaleechee Pike, Maryville, TN 37803. Graveside service will be at 12:00 Noon, Saturday, November 13, 2021 at Lakewood Memorial Gardens, Rossville, GA with Joe Goddard officiating. Smith Funeral & Cremation Service, Maryville, 865-983-1000, www.SmithFuneralandCremation.com.

Michael Ernest Goddard was born March 25, 1949 to the union of Franklin Eugene Goddard and Edna Louise Perry Goddard, and passed away on Friday, November 5, 2021 after a 14 month struggle with pancreatic cancer. He has joined them in heaven... View Obituary & Service Information

The family of Michael Ernest Goddard created this Life Tributes page to make it easy to share your memories.

Send flowers to the Goddard family.