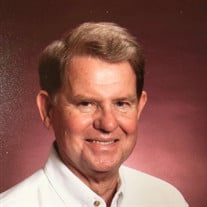 Larry Eugene Smith, 79, passed away on April 9, 2020 at his home in Townsend, TN. Larry was born September 19, 1940 to Paul and Anna (Edwards) Smith in Greene County, MO. He grew up in Hanover, Kansas and graduated from Hanover High school. He attended Southwest Missouri State in Springfield, MO and the University of Missouri at Rolla for undergraduate and graduate chemistry studies while also managing the undergraduate chemistry labs. After conducting additional graduate studies and research at the University of Tennessee in Knoxville, TN, Larry worked as a chemical engineer for Tennessee Valley Authority and an environmental lab in Oak Ridge – mainly providing his services to the nuclear power industry. Larry was an avid trout fisherman. While in Missouri, he often went to the Meramec River early in the morning before work and caught enough trout to feed his family for several days. After retirement he operated Tuckaleechee Trout Farm and Restaurant in Townsend, TN where he most enjoyed teaching children about trout. Another favorite activity was simply interacting with the many visitors to the Great Smoky Mountain National Park who enjoyed fishing and eating their catch at the trout farm. Larry and his wife, Maureen Sue (Nelson) Smith met in high school and recently celebrated sixty years of marriage. Larry was an active member of the United Methodist Church in Townsend, TN and also taught an adult Sunday School class there. Larry was preceded in death by his parents, his brother Donald Smith, and infant son Todd Smith. Larry is survived by his wife, sister Paula Sivils of Springfield MO, daughter Gina Pariser, son Steven Smith, and his four grandchildren Ada Pariser, Kayla Pariser, Matthew Smith, and Dalton Smith. A memorial service will be held on Friday, September 10, 2021, at 1:00 PM at Tuckaleechee United Methodist Church, 7322 Old Tuckaleechee Road, Townsend, TN. A reception with refreshments will be held following the service, from 2:30 to 4:00 PM, in the church assembly room. Memorial donations may be made to Blount Memorial Hospice (1095 E Lamar Alexander Pkwy, Maryville, TN 37804), Tuckaleechee United Methodist Church (7322 Old Tuckaleechee Rd, Townsend, TN 37882) or to your favorite charity.

Larry Eugene Smith, 79, passed away on April 9, 2020 at his home in Townsend, TN. Larry was born September 19, 1940 to Paul and Anna (Edwards) Smith in Greene County, MO. He grew up in Hanover, Kansas and graduated from Hanover High school.... View Obituary & Service Information

The family of Mr. Larrry Eugene Smith created this Life Tributes page to make it easy to share your memories.

Send flowers to the Smith family.