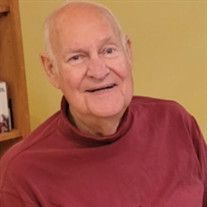 Kenneth Gene Ownby – sunrise May 29, 1938 – Sunset September 9, 2021. Gene departed from this earthly world on September 9, 2021 surrounded by his loving family. His daughter, Lisa Ownby and best friend, and son-in-law Matt Connolly, survive him, as well as his grandchildren Marshall, Briar, Oakley and Townsend Ownby-Connolly, and siblings Edward Ownby, and Floann Myers (Clark Myers). He is preceded in death by his parents, Velma Irene Tipton and Marshall Frantz Ownby, son David Eugene Ownby and former wife, but forever friend, Margaret Hackworth Ownby and brother, Hugh Dott Ownby. Born and raised in the Smoky Mountains of Tennessee, Gene graduated from Townsend High School in 1956, serving as class president his junior and senior years. Upon graduation he joined the U.S. Navy after serving in the reserves while in high school. After his honorable discharge he completed airline school in Kansas City, moving to Washington D.C. in 1959, where he began his 43-year career with the airline industry working for National, Pam Am and Delta Airlines, where his daily interactions were with members of Congress, Hollywood stars and many a businessman. Some of his favorite passengers who knew him by name were: Sam Donaldson; Tom Brokaw, Jimmy Dean, Geraldo Rivera; Dan Rather; Bob Dole; Bobby, Teddy, Jack and Jackie Kennedy; Ted Kopple; Jimmy Stewart; Jane Polly; Arnold Schwarzenegger; Maria Shriver; Katie Couric; Linda Carter; Maury Povich; and so many more. He also studied at American University and University of Virginia. His marriage in 1964 to Margaret gifted him with the birth of Lisa and David. Raising them and being their father was his most valued job, second only to being a doting grandfather. He moved from the D.C. area to Williamsburg in 2014 so that he could attend sporting, theatrical, musical and all school events of his grandchildren. Nothing gave him more joy than to cook and shop for his grandchildren and share stories of his youth in the Smoky Mountains. He was also a devoted fan of Lafayette High School football. Gene Ownby was as honest as the day is long, had a sense of humor and kindness that was unparalleled, he was salt of the earth, the real deal, and he was so very much loved by his family and friends. Returning to his Tennessee roots, a graveside service and burial will take place in Townsend, Tennessee where he will be singing Rocky Top, eternally…. Rocky Top You’ll Always Be, Home Sweet Home to Me, Good Old Rocky Top, Rocky Top Tennessee. Friends and Family will be received at Smith Funeral Home, 1402 Tuckaleechee Pike Maryville, Tennessee 37803 Friday, September 17, 2021 from 10 am to 12 pm. Due to inclement weather the funeral service will follow at 1:00 pm in Smith Trinity Chapel with Rev. Greg Long officiating. Interment will follow at Bethel Baptist Church 123 Bethel Church Road Townsend, TN 37882. In lieu of flowers, donations can be made in his honor to Child Development Resources, 150 Point O’ Woods, Williamsburg, VA 23188, cdr.org. A celebration of life will be held in person and live streamed at King of Glory Lutheran Church, October 9 at 10 am, 4897 Longhill Road Williamsburg, VA 23188, kogva.org. Online condolences can be shared at www.bucktroutfuneralhome.net. Smith Funeral & Cremation Service, Maryville, 865-983-1000, www.SmithFuneralandCremation.com

The family of Kenneth Gene Ownby created this Life Tributes page to make it easy to share your memories.

Send flowers to the Ownby family.