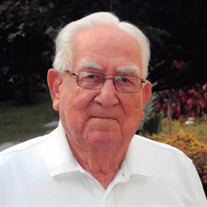 Kenneth Edgar Byrd, 94, left this earthly home Monday, October 12, 2020. He was born January 16, 1926, in Alcoa, TN, the son of Luther and Vola Byrd. He was preceded in death by his wife of 65 years, Betty Coker Byrd; son, Ken Byrd Jr.; siblings, Clarence Byrd, Louise Franklin, and Imogene King. Survivors include his daughters, Karla Kirby and husband Tom Kirby of Farragut, TN and Karen Morgan and husband Reed Morgan of Louisville, TN; daughter-in-law, Chris Byrd of Clayton, GA; grandchildren, Ty Kirby of Knoxville, TN, Kendra Lashley of Kennesaw, GA, Krista McIntosh of Knoxville, TN, Kara Stephenson of Goodlettsville, TN, Kameren Todd of Griffin, GA and Kolby Byrd of Clayton, GA; sister-in-law and husband, Bobbie and Glenn Ramsey of Maryville. In addition, he leaves 14 great-grandchildren and many nieces and nephews. Ken was a man of integrity who had a strong work ethic and was respected and loved by many. He was a follower of Jesus Christ and a current member of Grandview Baptist Church. He served as a Deacon, taught Bible classes, and sang in the choir as a member of Friendsville and Armona Baptist Churches. Ken was a graduate of Alcoa High School and the University of Tennessee. He volunteered as a Navy Aviation Cadet during World War II. After 30 years of service as a coach, teacher, and elementary principal, he retired from the Blount County Board of Education during which time he served a term as a president of Blount County Principals Association and a term as vice-president of Blount County Education Association. Ken was a member of the Blount County Sports Hall of Fame. He served as president of Green Meadow Senior Men’s Association and representative to East Tennessee Senior Men’s Golf Association. For several years he was a member of a course rating ream for the Tennessee Golf Association. Ken designed and co-developed Woodthrush Subdivision. He served on the board of directors of Windsor Manor Condominium Association and volunteered as a member of the Blount Memorial Hospital Auxiliary. The family would like to thank the nursing staff at Shannondale for their loving and supportive care. They are also following Ken’s directive that there be no flowers, tributes, or memorials in his honor. A private burial was held on Wednesday, October 14, 2020. There will be an outdoor celebration on Ken’s life at 11:00 AM on Friday, October 23, 2020 at the Grandview Cemetery Pavilion. Smith Funeral & Cremation Service, Maryville, 865-983-1000, www.SmithFuneralandCremation.com

The family of Kenneth Edgar Byrd created this Life Tributes page to make it easy to share your memories.

Send flowers to the Byrd family.