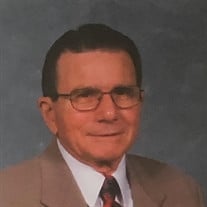 James “Preacher Jim” McCulla, age 93 joined his Heavenly Father Saturday, June 20, 2020. Jim was born to James and Myrtle McCulla July 31, 1926 in Knoxville, TN. He graduated as Valedictorian from Central High School class of 1944, served in the United States Army in the South Pacific, where he was a “south paw” pitcher for the Army baseball team. After returning home, he attended and pitched ball for The University of Tennessee before transferring to and graduating from Carson Newman College. He married the love of his life, Dorothy “Dottie” Hodgson in 1950 and moved to Ft. Worth, TX, where he attended and graduated from Southwestern Seminary. He pastored churches in Texas, Montana, and California before returning to Tennessee in the mid 1960’s where he continued to pastor churches in Knoxville and Blount County until he retired. “Preacher Jim” had a gentle spirit, sweet smile, twinkle in his eye, and a kind word for everyone he encountered. He often attempted to lighten one’s day by sharing a joke (or two). He was a devoted pastor, husband, father, friend, and above all a faithful servant of Jesus. Jim is survived by his daughters, Mary Woodcock and her husband, Jim of Athens, GA, Carol Russell of Walland; son, Jimmy McCulla and his wife, Sharon of Maryville; 10 grandchildren; 18 great-grandchildren. Preceded in death by his beloved wife, Dottie; daughter, Becky Tallent; son, John McCulla; sister, Barbara Rucker. In lieu of flowers, donations can be made to Rocky Branch Missionary Baptist Church Building Fund, 4620 Cambridge Rd., Walland, TN 37886. This service has been postponed until a later date. A private graveside service will be held at Rocky Branch Missionary Baptist Church Cemetery. Smith Funeral & Cremation Service, Maryville, 865-983-1000, www.SmithFuneralandCremation.com.

The family of James W. McCulla created this Life Tributes page to make it easy to share your memories.

Send flowers to the McCulla family.