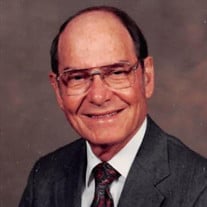 Reverend James William Hopper of Alcoa, TN passed away on Monday, May 18, 2020 with only two days remaining before his 95th birthday. After a lengthy battle with cancer, he died peacefully in his sleep in the home he shared with his Beloved wife Gracene, whom he married in 2003. Rev. Hopper was born on May 20, 1925 to Landon and Myrtle Hopper. Preceded in death by parents and his first wife, Dent to whom he was married for 52 years. He was a veteran of WWII, serving in the Navy. He opened a dry cleaning business in Rutledge after returning from the war. Upon answering the call to the ministry, he pastored churches in Granger, Knox, Carter, and Blount Counties, even as he struggled to complete his education, eventually earning his degree from Carson-Newman. Although he semi-retired from the ministry some 18 years ago he served as a member of Broadway Baptist Church. As his health declined his attendance continued, following the services on TV. He shared his love for God and family wherever he was. Rev. Hopper is survived by his loving wife of 17 years, Gracene of Alcoa. He is also survived by his one daughter, Lynda and husband, Ted; two grandchildren, Julie and Max; four great-grandchildren, Elisabeth, Dustin, Madialynne, and Rachel. Completing five generations are those who knew him as “Poppy” his six great-great grandchildren, Kole, Kyli, Ella, Ava, Nora, and Jacob. Rev. Hopper is also survived by step-children, Steve Cottrell and wife, Joyce; step-daughter, Vickie Robbins; and numerous step-grandchildren and step-great-grandchildren. Family requests that in lieu of flowers, donations be made to Broadway Baptist Church, 2329 E. Broadway Avenue, Maryville, TN 37803. Special thanks to Blount Memorial Hospice nurses, Emily, Hiroko, and Audria. A private graveside service will be held with Dr. Tony Collins officiating. Smith Funeral & Cremation Service, Maryville, 865-983-1000, www.SmithFuneralandCremation.com.

Reverend James William Hopper of Alcoa, TN passed away on Monday, May 18, 2020 with only two days remaining before his 95th birthday. After a lengthy battle with cancer, he died peacefully in his sleep in the home he shared with his Beloved... View Obituary & Service Information

The family of James W. Hopper created this Life Tributes page to make it easy to share your memories.

Send flowers to the Hopper family.