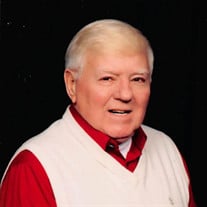 James Thomas Cross, age 83 of Maryville, passed away Monday, March 1, 2021 at Blount Memorial Hospital. James was a member of Broadway Baptist Church where he was in the choir and was a soloist. He was a 60 year plus member of the Rockford Masonic Lodge, former member of the Memphis Masonic Chapter, Council and Commandry. Associate Patron Eastern Star Lion’s Club in Paragould, Ark. He worked with the Maryville-Alcoa Rehabilitation Center for 7 years and was chairman of the board of directors for 1 year. He was a former member of the Maryville-Alcoa Jaycees, Memphis Summer Stock Theater, University of Tennessee Theater, University of Tennessee Students Union and University of Tennessee Wrestling Team. He enjoyed his years at the University of Tennessee where he double major-majored in Psychology and Industrial Management. He also enjoyed his many years at Alcoa Aluminum Company, where he was a member of the 25-year club before retirement in 1992. He was the first President of Youth for Christ in Blount County and the first Youth Pastor for Broadway Baptist Church, former Scout leader, Red Cross instructor, lifeguard and a member of Order of the Arrow. He was area Representative for American Scandinavian Student Exchange. James traveled extensively in 15 European and Scandinavian Countries. He met with a Russian Delegation in Budapest, Hungary, concerning American sponsorship of Russian colleges. He had a very full and enjoyable life but nothing compared to the almost 50 years of marriage to his wife, Sharon. They reared 3 children and all of them have become very successful and upstanding members of their communities. “I hope and pray that my life has made a positive impact on my children and perhaps a few other people.” Preceded in death by wife, Sharon A. Carpenter Cross; parents, Walter and Tola Cross; grandparents, James M. and Nancy Rosemary Cross, J.O and Cordia Davidson. Survived by children, James Mark Cross (Wendy), Matthew Shane Cross, Cherrie Bregitte Cross (Dea); grandchildren, James Andrew Cross, Skyler Brooke Mott (Jeremy), William Kaleb Cross, Daniel Leif Cross; great-grandchildren, Deshun Campbell, Sophia Mott; sister and brother-in-law, Iris Ann Wilkerson (David); brother-in-law, Greg Carpenter; sister-in-law, Sandra Evans; nieces and nephews, David Scott Bell (Saundra), Brian Todd Bell, Jeff Coslett, Kim Coslett, Michael Coslett. In lieu of flowers, he would prefer to have donations sent to 2707 Patrick Avenue, Maryville, TN 37801 in care of James T. Cross and donations will be made to his charity of choice. Family will receive friends from 1:00 until 3:00 PM on Sunday, March 7, 2021 at Broadway Baptist Church, 2329 E. Broadway Ave, Maryville, TN 37804. The funeral service will follow at 3:00 PM with Rev. Tony Collins officiating. Smith Funeral & Cremation Service, Maryville, 865-983-1000, www.SmithFuneralandCremation.com.

James Thomas Cross, age 83 of Maryville, passed away Monday, March 1, 2021 at Blount Memorial Hospital. James was a member of Broadway Baptist Church where he was in the choir and was a soloist. He was a 60 year plus member of the Rockford Masonic... View Obituary & Service Information

The family of James Thomas Cross created this Life Tributes page to make it easy to share your memories.

Send flowers to the Cross family.