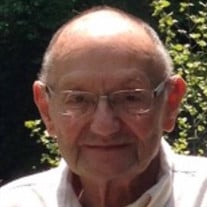 Jack L. Dove, 84, of Maryville Tennessee, Formally of Fontana California passed-away on Sunday December 13, 2020. Jack was born October 29, 1936 in Lansing Michigan. After high school he worked as an auto mechanic and later for consumers power gas company. He married his first wife Patricia in 1955 and had five children. In 1964 he moved to Fontana California. Shortly after moving to California he and Pat divorced and he married Rosie and adopted her three children after having one of their own. After moving to California, he went to work for Kaiser steel as a millwright until they closed in 1983 and then went to work for California steel industries until he retired in January 1999 and moved to Maryville Tennessee in 2004 The most important thing in his life was his family and keeping them together and spending time with them His hobbies included old cars, car shows, target shooting and going boating. Jack was preceded in death by his parents, John and Gladys Dove; his brother, Gene and his son, Tom. He is survived by his wife, Rosie of 53 years; his sister, Linda Morris, and his eight children, Molly and her husband, Andy Sanchez, Toni and her husband, Jim Richardson, Kathy and her husband, Steve Jones, Chris Kruger, Doug, Heidi Rogers, Selina and her husband, David Hamilton, Matt and his wife, Jennifer; his two nephews, Johnny Dove and Scott Thorland; his cousin, Rose Weese Easton; his 26 grandchildren; 45 great-grandchildren; 4 and soon to be 5 great-great-grandchildren. He was loved by all and will be truly missed and never forgotten. The family will receive friends on Sunday, December 20, 2020 from 1:00 until 2:00 pm with a celebration of Jack’s life to be held at 2:00 pm in the East Hall of Smith Funeral & Cremation Service, 1402 Tuckaleechee Pike Maryville, TN 37803. Memories and condolences may be shared at www.SmithFuneralandCremation.com.

The family of Jack Lenard Dove created this Life Tributes page to make it easy to share your memories.

Send flowers to the Dove family.