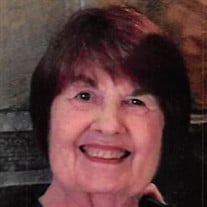 Georgetta "Jody" Rogers, age 81, of Maryville, TN departed this life unexpectedly on 1/1/21. She was born and raised in Los Angeles, CA but chose the beautiful town of Maryville to raise her family for the past 55 years. While in Los Angeles, she volunteered and was involved with the Los Angeles Police Department providing activities to help keep children and teens off the streets. After arriving in Tennessee to raise her family, she attended and graduated from the University of TN in Knoxville, where she earned a BS, MS, and EdS, all with an emphasis in early education. She was employed by Blount County Schools where she taught kindergarten at Eagleton Elementary School for 27 years. She was also an evaluator for the State of Tennessee in the Career Ladder program, traveling extensively statewide. She was selected as the East TN Regional and Eagleton Elementary's Teacher of the Year in 1997, followed by being named one of six finalists for the Tennessee State Teacher of the Year in 1998. She retired from Blount County Schools in 1999 and spent many years traveling with her husband, the late Joe E Rogers Sr. She was inducted into the Blount County Schools Educator Hall of Fame in the inaugural class of 2018, recognized for her devotion to the education of the children of Blount County. She volunteered with the Auxiliary Department at Blount Memorial Hospital and assisted with the Junior Volunteer program for numerous years. Her entire life was centered on mentoring and educating children and young teens. Our family would like to recognize, thank, and extend our gratitude to the young man who passed suddenly in 2005 and selflessly donated his organs. He gave our Mother the gift of life for 16 years through the gift of a kidney transplant. She was welcomed home by her parents, George and Jean McClure of Huntington Beach, CA; her baby sister, Mary Eckmann of Santa Ana, CA; and her devoted husband of 47 years, Joe E Rogers Sr. She will be missed dearly by her children: sons, Joe Rogers Jr and granddaughter, Gabi of Homosassa FL; Eric Rogers (Lan Gellert MD), grandchildren Noah, Emily and Lucia of Nashville TN, grandson Evan and great granddaughter, Marley of Charlottesville VA; and daughter, Kimberly Rogers Luttrell of Maryville TN and granddaughters, Abby (Michael) Mackey and Katie Beth Esch of Knoxville, TN. Also remembered and missed by her brother, George (Jeri) McClure Jr of San Ignacio, Baja California Sur; numerous cousins, nieces and nephews. The family will hold a celebration of her life in the summer, date and time to be announced. In lieu of flowers, the family requests donations be made to Tennessee Donor Services, 566 Mainstream Dr Ste 300, Nashville TN 37228 or the National Kidney Foundation, Finance Department, 30 East 33rd Street, New York NY 10016. Smith Funeral & Cremation Service, Maryville, 865-983-1000, www.SmithFuneralandCremation.com.

Georgetta "Jody" Rogers, age 81, of Maryville, TN departed this life unexpectedly on 1/1/21. She was born and raised in Los Angeles, CA but chose the beautiful town of Maryville to raise her family for the past 55 years. While in Los Angeles,... View Obituary & Service Information

The family of Georgetta Jody Rogers created this Life Tributes page to make it easy to share your memories.

Send flowers to the Rogers family.