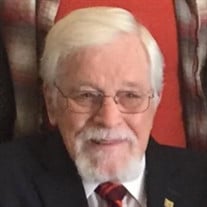 George David Campbell, 93, died on September 8, 2021. A celebration of his wonderful life will be on Saturday, October 2, at 11:00 a.m. at New Providence Presbyterian Church in Maryville, TN. A painter, a horticulturist, a poet, a writer, a teacher and a preacher, David was a modern day Renaissance Man He was the eldest son of the late D. Rayburn and Marion Campbell, born in Washtucna, WA, in 1927. The son of a minister, the family moved several times before settling in western Pennsylvania. After graduating high school, David moved south to attend Maryville College in Tennessee. While there, he grew closer to the love of his life, Peggy, whom he married in 1950. David went back to PA to attend seminary in Pittsburgh, where he led his first church. After two sons, they moved back to Tennessee, where he led churches in Rockwood and Cookeville. He was the minister at Cookeville First Presbyterian for more than 26 years before retiring in 1993. He continued to lead churches in retirement, including Fork Creek Presbyterian in Sweetwater, TN. David was a renowned artist, who exceled in watercolors and pen and ink drawings. He has artwork all over the country, from California to New York. He especially loved the barns around middle and eastern Tennessee. In his retirement, he grew beautiful roses, wrote volumes of poetry, and taught all of his grandchildren a love of painting. David was preceded in death by his parents, his wife of 69 years, Margaret, his two brothers, Jim and Jerry Campbell, and sisters-in-law, Janice Campbell and Charlotte Campbell. He is survived by his three sons, John (Laurel) of Bozeman, MT, Bob (Lisa) of Albany, GA, and Thom (Rachel) Campbell of Centreville, VA, and grandchildren Julie Campbell, Stephanie Woolsey (Cameron), David, Sarah and Benjamin Campbell. In lieu of flowers, the family requests that donations be made in memory of G. David Campbell to Maryville College at www.maryvillecollege.edu/givetoday. For those planning to attend the service, we request that you wear a mask for your protection and others in attendance. Smith Funeral & Cremation Service, Maryville, 865-983-1000, www.SmithFuneralandCremation.com

George David Campbell, 93, died on September 8, 2021. A celebration of his wonderful life will be on Saturday, October 2, at 11:00 a.m. at New Providence Presbyterian Church in Maryville, TN. A painter, a horticulturist, a poet, a writer, a... View Obituary & Service Information

The family of George David Campbell created this Life Tributes page to make it easy to share your memories.

Send flowers to the Campbell family.