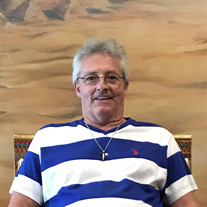 Fred Jackson King, Jr. 63, joined his father Fred Jackson King, Sr. and grandparents in Heaven on April 3, 2020. His devotion and support to his family was evident on a daily basis. He was blessed with a family who loved him through some difficult years of personal struggles. However, he never failed to let people know that God turned all that around for him. God was the one who done the work in his life. He loved the Lord and his church family, Dotson Memorial Baptist Church. He especially loved working with the Sonshine Class. Fred was born on May 11, 1956 in Knoxville, TN. Fred attended Doyle High School. He was a retired auto mechanic, who enjoyed racing with a passion, especially dirt track racing. He coached baseball for several years at Eagleton Little League and his face would light up when he saw his children and grandchildren play. He leaves behind his beloved Laura Renea King whom he married on June 7th, 1985. They had 3 children together, 2 very supportive son-in-laws; Heather (Greg) Muse, Haley (Adam) Henry, Derek King, he also had 2 other children: Ashley Rader & Travis Hickam. Grandchildren include Keegan, Stella, Hayden, Adley, Caden, Chasity, Donovan, Charity, Corey, Alycia, Bradon, Averyn, Maley and Destiny along with 11 great-grandchildren. He also leaves his devoted mother Wilma Joyce King Chrisman. Brother and Sisters; Donnie (Teresa) King, Peggy Scrivner, Sonya (Brian) West and Pamela (Joe) Sneed, along with several nieces and nephews, sisters-in-law and brothers-in-law. We do not want to forget to mention his special mother-in-law, Joyce C. Wilson. Due to the trying times the country is going through, our family has chosen to have a celebration of life at Dotson Memorial Baptist Church on a later date. The family requests in lieu of flowers, memorial contributions may be made in Fred’s memory to help with his final expenses by calling Smith Funeral & Cremation Service 865-983-1000 or by mail to: 1402 Tuckaleechee Pike, Maryville, TN 37803. www.SmithFuneralandCremation.com

Fred Jackson King, Jr. 63, joined his father Fred Jackson King, Sr. and grandparents in Heaven on April 3, 2020. His devotion and support to his family was evident on a daily basis. He was blessed with a family who loved him through some difficult... View Obituary & Service Information

The family of Mr. Fred Jackson King Jr. created this Life Tributes page to make it easy to share your memories.

Send flowers to the King family.