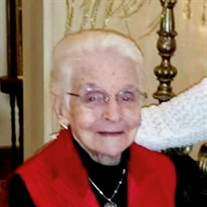 Emma Akers Short, 96, of Maryville, Tn., went to be with the Lord on December 8, 2021 at her residence. She was born to the late John Henry and Allie Mae Leake Akers, April 22, 1925, in Memphis Tn. She married the late Robert A Short in 1945 for 65 beautiful years. Following his discharge from the US Army they moved to East McKeesport, Pa., where they resided until 1967, before relocating to Gainesville, Fl. Following her husband’s passing, she moved to Maryville, Tn. Emma is survived by 2 daughters, Joan (Tom) Walter of Summerville, S.C. and Janet Moulton(Rick Hoveland) of Vonore, Tn. She is also survived by 3 grandchildren, Melissa Walter Witcher of Goose Creek, S.C. and Stephanie Walter Knox (Greg) of Goose Creek, S.C., and Jayme Short DeLeon (Ricky) of Indianapolis, In. Also surviving are five great grandchildren, Olivia and Ben, Emily and Elliott and CJ. Also, a brother George Washington Akers of Memphis Tn. Plus scores of nieces, nephews and friends, who she dearly loved and had a special place in her heart. She is predeceased by two sons, James Robert Short and Frederick Arthur Short, one granddaughter Angel Short, and a sister Mary Ann Timbs. While living in East McKeesport, she was an active member of East McKeesport United Methodist Church, where she shared her lovely voice singing in the church choir. She was also an active member in The Order of the Eastern Star where she attained the high office of Grand Worthy Matron. Following their move to Gainesville she became an active member at Trinity UMC. Emma was very involved in the Gainesville Florida Garden Club, Daisy Circle, holding the office of past President, Master Judge Emeritus and honored in the Florida Federation of Garden Clubs Hall of Fame. Emma enjoyed her love of crafting, jewelry making and gardening. Emma was a loving and selfless wife, mother, sister, friend and servant of God. She loved meeting people and hearing their life journey. She loved living for today and had a gift to make everyone feel that they were God's children and were valued. Mother's Godly spirit, conversations and smile will be dearly missed by all. Emma's viewing will be held at Smith Funeral Home and Crematorium 1402 Tuckaleechee Pike Maryville, Tn., on December 18. Family viewing 1:00-1:30, community viewing 1:30 to 2:30, following by a service at 2:30. In lieu of flowers and Mom's love of Billy Graham, please donate to samaritanspurse.org. Smith Funeral and Cremation Service, Maryville, 865-983-1000, www.SmithFuneralandCremation.com.

Emma Akers Short, 96, of Maryville, Tn., went to be with the Lord on December 8, 2021 at her residence. She was born to the late John Henry and Allie Mae Leake Akers, April 22, 1925, in Memphis Tn. She married the late Robert A Short in 1945... View Obituary & Service Information

The family of Emma Akers Short created this Life Tributes page to make it easy to share your memories.

Send flowers to the Short family.