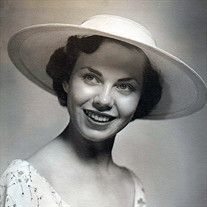 Elizabeth Jeanette Rhodes Bowen wound up her business here on earth February 12, 2020. She was born in Butterfly, a coal-mining camp in Perry County near Hazard, KY, on July 31, 1933, to Edgar ‘Jack’ E. and Delphia Fields Rhodes. The eldest of four, she and her younger brothers grew up in the harsh, rough-and-tumble world of Depression-era deep-coal mines and miners. Following World War Two, to escape growing mine violence and in hopes of a better life for his family, Jack Rhodes joined the Hillbilly Diaspora and took his tribe north to work in the post-war industrial boom in Indiana, Ohio and Michigan. The family settled in Austin, IN, where her father worked for Arvin making car parts and Betty Jeanne, as she was called then, graduated from Austin High School in 1951. Miss Rhodes moved on to Knoxville, Tennessee, where she enrolled in nursing school at the old Knoxville General Hospital. Because of her tomboyish ways and ready sense of adventure, her classmates nicknamed her, appropriately enough, ‘Dusty’, the name she carried proudly for the rest of her life. Strikingly beautiful, she attracted the attention of a freshly minted radiologist on the medical staff, John H. Bowen, born on a dirt farm in South Mississippi in 1924, who conscripted her as wife and best friend in 1953. They embarked on a fairly-tale romance and life that lasted until John’s death in 2013. In 1954, the newlyweds settled briefly in Maryville, in Blount County, and shortly thereafter moved to the village of Louisville where they settled on an old farm in an old brick house and spent the better part of the rest of their lives. Dusty busied herself with making a home of the house and welcomed the first of her two sons, Hamilton, early in 1956 and Jackson, late in 1957. Between 1961 and 1965, she and ‘Doc’ and the boys spent two tours living in Bangkok, Thailand, where John helped found a department of Radiology at the Bangkok Sanitarium and Hospital operated by the Seventh-Day Adventist Church. Doc and Dusty occasionally disappeared into the bush and into Laos to work in remote medical clinics. Still, as mission stations go, it was otherwise no hardship post. Dusty looked after her children, played tennis and swam at the Royal Bangkok Sports Club and wandered extensively in one of the world’s largest metropolitan areas with improbably congested streets. Utterly fearless, she thought nothing of a sally into this torrent of traffic with her small sons in a VW Beetle or Land Rover, both right-hand drive, driving on the ‘wrong’ side of the road. The usual haunts were the Pasteur Institute (aka ‘the snake farm’), the zoo, assorted temples and ruins, markets, occasionally the harbor if the various navies of the world called with some notable ship. One could not have special-ordered a better mother for little boys. Back home again, Dusty immersed herself in local affairs in East Tennessee: the Women’s Medical Auxiliary, where she was actively involved in anti-drug programs for primary-school students, the Blount Country Historical Society and Knoxville Opera Society. A bright and curious sort, Dusty was an avid reader, especially of colonial history and exploration. Ever gracious and elegant, she entertained regularly in the old home place, welcoming people from all walks of life. She never met a stranger. On more than one occasion, she and her family would end up eating with total strangers in a restaurant. A product her upbringing, she could be fearsome in the care of her people, but always kind and generous to all. She sailed through life with every stitch of canvas tied on and left in her wake wisdom, inspiration and good cheer. She and Doc hoisted themselves up by their bootstraps, proud exemplars of the American Dream and stalwart members of the Greatest Generation. The original coal miner’s daughter, Dusty never turned her back on her hillbilly heritage and roots. Early in her descent into the darkness of Alzheimer’s Disease, she was found in a wheelchair in the parking lot of her nursing home. True to form, she was making a break for it, heading for the open road. Queried gently by a staff member as to her plans, she advised she was heading home to Kentucky. Godspeed, Mom. Dusty was preceded in death by her husband John H. Bowen, parents Jack and Delphia Rhodes, brother Edger E. Rhodes and wife Julie and brother John R. Rhodes. She is survived by her son Hamilton, wife Evans and granddaughters Caroline and Alexandra and son Jackson, wife Terry and granddaughter Catherine, brother Leo T. Rhodes and wife Paula, sister-in-law Juanita (wife, John R. Rhodes), numerous cousins, nieces and nephews. The family offers a particular thanks to her many caregivers and friends at the Shannondale Nursing Home in Maryville, TN. A private graveside service is planned for family and close friends. Memorials in her memory are invited for the Knoxville Opera Company at 612 East Deport Avenue, Knoxville, TN, 3797 (www.knoxvilleopera.com). Smith Funeral & Cremation Service, Maryville, 865-983-1000, www.SmithFuneralandCremation.com.

Elizabeth Jeanette Rhodes Bowen wound up her business here on earth February 12, 2020. She was born in Butterfly, a coal-mining camp in Perry County near Hazard, KY, on July 31, 1933, to Edgar &#8216;Jack&#8217; E. and Delphia Fields Rhodes.... View Obituary & Service Information

The family of Elizabeth Jeanette Bowen created this Life Tributes page to make it easy to share your memories.

Elizabeth Jeanette Rhodes Bowen wound up her business here on...

Send flowers to the Bowen family.