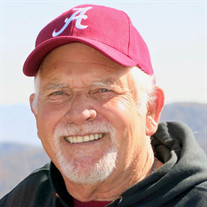 Edward Thomas (Ted) Mileski, 80, of Louisville, TN, went home to be with His Lord on Thursday, July 16, 2020. Born and raised in Birmingham, AL, Ted was a graduate of Ensley High School and received his BA degree from Athens College. Ted spent much of his career in sales, later starting his own paint contracting company. Work took him from Louisville, KY back to Birmingham, AL and to Largo, FL where he retired from Linvatec, a surgical tool manufacturing company. In 2011, Ted and Linda moved to Tennessee. Ted’s Christian faith guided him throughout his life. He was a longtime member of Wilson’s Chapel UMC in Birmingham, where he served as a Deacon and member of the choir. After moving to Florida, Ted was an active member of St. Anne’s Episcopal Church, and later at Faith Presbyterian Church. After moving to Tennessee, Ted and Linda joined Sevier Heights Baptist Church in Knoxville where they enjoyed biblical teaching and Christian fellowship. Ted was a lifelong fan of the Alabama Crimson Tide. He liked to fish and hunt. He also enjoyed cooking, especially making breakfast with his grandchildren, holiday goodies with his daughter, and slow cooking his famous Boston butt. He took up beekeeping and gardening in TN. He loved the country life, tooling around his 5-acre property on his riding lawn mower. Family was always at the center of Ted’s world, and he loved nothing more than spending time with them. He is survived by his loving wife of 30 years, Linda Mileski; sister Cathy Mileski of Knoxville, TN: children Teddy Mileski (Jenni) of Robertsdale, AL and grandchildren Laine Mileski (Raven) of TX and great grandson Dimitri, Larisa Owen (Brad) of TX and great grand children Rayne and Grey; Cassie Farris (Paul) of TX; Adrian and Jude of Robertsdale, AL; Chris Mileski (Megan) of Hoover, AL, and grandchildren Reeves, Lucy, and Greer; Eric Garner (Rachel) of Cedartown, GA and grandchildren Anna and Cara; Michael Garner (Gwen) of Sevierville, TN and grandchildren Abby, Josh, Lydia and Annie; and Rachel Granado (Vince) of Natalia, TX and grandson Elijah; and his special “brother from another mother,” John Morris (Donna) of Pell City, AL, plus many cousins and close friends. Celebration of Ted’s Life will be held at 3:00 on Thursday, July 23rd at Grandview Pavilion (an outside venue)2316 Graves Rd,Maryville, TN 37803. Dress will be casual and facemasks are recommended. In lieu of flowers, the family requests that donations be made to Wears Valley Ranch or a charity of your choice.

Edward Thomas (Ted) Mileski, 80, of Louisville, TN, went home to be with His Lord on Thursday, July 16, 2020. Born and raised in Birmingham, AL, Ted was a graduate of Ensley High School and received his BA degree from Athens College. Ted spent... View Obituary & Service Information

The family of Edward Thomas Mileski created this Life Tributes page to make it easy to share your memories.

Send flowers to the Mileski family.