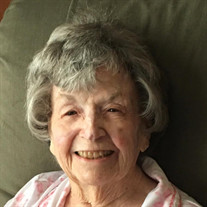 Edna Alliene Ousley Hutchens, 99, died at Asbury Place, Monday, July 20, 2020. She was born on May 16, 1921, in Union County, Tennessee, to Dr. J.M. and Mrs. Myrtle Longmire Ousley. In 1935, her family moved to Blount County, where she finished her high school studies in the Everett High School class of 1938. She graduated from the University of Tennessee in 1942 with a degree in home economics, the subject she taught at Everett High School from 1942-48 and 1957-77 and at Heritage High School from 1977 until retirement in 1986. On June 14, 1946, after a nine-year courtship, prolonged by World War II, she married Lois Gilford Hutchens, a marriage which continued until his death in 2005. In addition to her parents and husband, she was preceded in death by her siblings, Roy Ousley, Ruth Ousley Higgins, Paul Ousley, Ralph Ousley, Earl Ousley, and Nelle Ousley Widner. She is survived by her son, Robert Hutchens; daughter and son-in-law, Virginia and Gary Loflin; three grandsons, Josh and Rob Loflin, and Steven Gaoyai, a grand-daughter-in-law, Anna Loflin; three great-grandchildren, Brady, Evie, and Max Loflin; and many devoted nieces and nephews. Through their marriage, she was a member of a number of churches her husband pastored; her final church home was Alcoa First United Methodist Church. She belonged to the Martha Washington Chapter of the Eastern Star, Alpha Delta Kappa Teachers’ Sorority, and the Chilhowee Club, proudly attaining many “centuries” in their reading group—a century denoting 100 books. Reading was a lifelong and daily pleasure until infirmity made it impossible. Edna Hutchens was an exceptional person. In cooking, bread-making, cake-decorating, sewing, and tailoring, she was a perfectionist. Her cakes did not fall, and the linings of her sleeves were as well-sewn as the sleeve itself. But she did not have the ego of a perfectionist, just the joy of doing things well. She was modest in all things. She was a scrupulous follower of the laws of God and humanity, but seemed not to notice those who were not. She did not see fault in others; she expected to find good, an expectation that was usually fulfilled. Her faith was unshakeable, but seldom spoken of. The satisfaction she took in life was expressed in quiet appreciation of it. In deference to the current health crisis, no funeral service will be held. Scripture and prayer will be offered by the Reverend Robert Brown at a private interment at Clarks Grove Cemetery. After the Covid crisis has passed, there will be a memorial service, at which family and friends can joyously reunite and celebrate the life of Edna Hutchens. In lieu flowers, it is suggested that memorials be made to charities of your choice. The family would like to thank the loving caregivers of Blount Memorial Hospice and Beech Cottage of Asbury Place. Their care was extraordinary. Smith Funeral & Cremation Service, Maryville, 865-983-1000, www.SmithFuneralandCremation.com.

The family of Edna Alliene Hutchens created this Life Tributes page to make it easy to share your memories.

Send flowers to the Hutchens family.