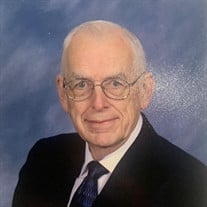 Dr. Merrill D Moore Jr, 87 of Louisville, TN went home to his Heavenly Father on April 12, 2021 in Shannondale Retirement Center. Merrill was born October 18, 1933 in Selma, Alabama to the late Merrill D Sr & Lorena Moore. He graduated high school in 1951 when, for the first time he felt the call on his life to enter the mission field. He entered Peabody College at which time he was called in the direction of medical missions. Starting in 1953 he spent many summers at Glorieta Assembly where he was able to exercise his love of photography by becoming the campus photographer. He entered Vanderbilt Medical School in 1955. He and Patty met at Glorieta and married in 1957. In 1958 he applied to the Foreign Mission Board and practiced medicine in the Gaza Strip from 1964-1976. After returning to the States and being board certified in surgery and emergency medicine, he served on many hospital boards and was Chief of Staff of East Tennessee Baptist Hospital. In 1982 he served as the President of the TN chapter of American College of Emergency Physicians. He was a founding member of the Baptist Medical - Dental Fellowship and served as President in 1991. Merrill loved his church, Monte Vista Baptist Church where he served as a Deacon and taught young adult Sunday School for many years. He was preceded in death by his loving wife Patty Moore. Survivors include his son Doug Moore and wife Robyn Moore, and his daughter Melissa Shaw. Also, five grandchildren- Seth Moore, Ethan Moore, Jonathan Beck, Patricia Hook, and Lauren Mishoe, and many loving great-grandchildren. Graveside Service will be conducted at 1:00 pm, Thursday, April 15, 2021 at Sherwood Memorial Gardens, Alcoa, Tn. Friends and family invited to attend. In lieu of flowers, the family requests that donations may be made to: Monte Vista Baptist Church Mission Fund, Chilhowee Baptist Center, or Carson Newman College. Smith Funeral & Cremation Service, Maryville, 865-983-1000, www.SmithFuneralandCremation.com.

The family of Dr. Merrill D. Moore Jr. created this Life Tributes page to make it easy to share your memories.

Send flowers to the Moore family.