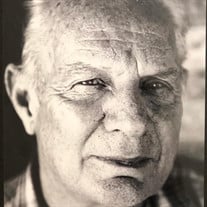 Darrell Leon Myers, age 84, of Maryville, TN passed away Tuesday, December 15, 2020. Leon was born on February 27, 1936 in Cades Cove, TN. He was a graduate of Everett High School and served in the United States Air Force. Leon was a building contractor for many years, and even in his older age, he loved to create, build, and tinker with projects. Leon was the former Building Trades Instructor at Porter, BOEC, and Heritage High School. He bonded with many of his students over the years and many lovingly called him “Pap”. After retiring, he enjoyed spending time with his family, playing with his grandchildren, and camping in Cades Cove. As a former resident of Cades Cove, Leon was very active with the Cades Cove Preservation Association and loved telling stories and historical facts about the Cove. He was an active member of Calvary Baptist Church and was a former longtime member of Cades Cove Memorial Church. Leon’s faith was strong, and he shined the love of Jesus on everyone he met. Preceded in death by his parents, Wiley Myers and Nancy Myers, wife, Lila Johnson Myers, and wife, Rita Stafford Myers. He is survived by his daughter and son-in-law, Tina Jane Simmerly and Jerry Simmerly; son and daughter-in-law, Aaron Leon Myers and Sarah Seaton Myers; stepdaughter, Kathy Chance; seven grandchildren: Hannah, Ryne, and Casey Simmerly; Lyla, Lincoln, Lorelai, and Luke Myers. Memorial services will be held at 6:30pm on Thursday, Dec. 17 at Calvary Baptist Church, 100 N Rankin Rd. Alcoa, TN 37701, with Rev. Greg Williamson officiating. For those that are unable to attend, the service will be streamed live on the church’s Facebook page. A Graveside service will take place the following day, Friday, Dec. 18 at the Faith Encounter church cemetery, 2342 Duncan Rd, Maryville, TN 37803. If desired, friends and family can make a donation in Leon’s name to the Cade’s Cove Preservation Association, 1004 E Lamar Alexander Pkwy, Maryville, TN 37803.

Darrell Leon Myers, age 84, of Maryville, TN passed away Tuesday, December 15, 2020. Leon was born on February 27, 1936 in Cades Cove, TN. He was a graduate of Everett High School and served in the United States Air Force. Leon was a building... View Obituary & Service Information

The family of Darrell Leon Myers created this Life Tributes page to make it easy to share your memories.

Send flowers to the Myers family.