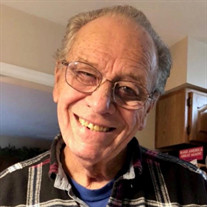 Charles Lavon Layus, age 76 of Maryville, went to be with his Savior Monday, March 15, 2021 at The University of Tennessee Medical Center. Charlie was well known in Blount County since he moved from New Orleans. He is a Katrina survivor and critical care nurse from Charity Hospital, New Orleans, LA. He leaves behind his true love and best friend, Karen Belle Layus; his children, Kelley Marinda and husband, J. Brant Sloan, Charles Patrick and wife Kristen Ann, and Andrew Robert; his brother, John Stephen Layus. He is preceded in death by his parents, Louis and Sarah Layus; brothers, Louis and Robert Layus. Charlie raised his family in New Orleans and relocated to Maryville, TN in 2006. Charlie was well known in Maryville as the smiling face at ABC Monograms. He has left a tremendous legacy of people that love him. His greatest treasures are his grandbabies, Brant Micah and Jennifer Sloan, Brock Malachi and Louisa Sloan, Brody Matthew Sloan, Colby Patrick Layus, Amelia Belle Layus, Braia Marinda Sloan and Brynn Marie Sloan. The family would like to thank ETMG, Dr. R. Gaddis, UT Oncology, Dr. Shrock and The University of Tennessee Medical Center for his care during his cancer battle. He was known and loved by everyone who he met. He served on the USS Semmes from 1962-1965. He is a plank owner and dear friend to his shipmates. Family will receive friends from 10:00 until 11:00 AM Saturday, March 20, 2021 at Smith Trinity Chapel. The Funeral Service will follow at 11:00 AM with Jimmy “PapPaw” Riner officiating. To honor his Navy service, please wear Red, White, and Blue. He will be sadly missed by all that knew Paw and loved him. Paw’s remains will be spread over the bayou in south Louisiana at a later-date. He always wanted to be on a shrimp boat in the bayou and his children and grandchildren will carry out those wishes. In lieu of flowers, the family ask for donations to be made to Kingdom Design Ministries, 412 Howard Jones Rd, Maryville, TN 37801 Smith Funeral & Cremation Service, Maryville, 865-983-1000, www.SmithFuneralandCremation.com

Charles Lavon Layus, age 76 of Maryville, went to be with his Savior Monday, March 15, 2021 at The University of Tennessee Medical Center. Charlie was well known in Blount County since he moved from New Orleans. He is a Katrina survivor and... View Obituary & Service Information

The family of Charles Lavon Layus created this Life Tributes page to make it easy to share your memories.

Charles Lavon Layus, age 76 of Maryville, went to be with his...

Send flowers to the Layus family.