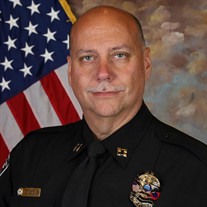 Captain Keith Fletcher, age 49 of Maryville, passed away Saturday, April 24, 2021 at Parkwest Hospital. Captain Fletcher had a successful career in criminal justice for over 30 years, beginning at the Knox County Sheriff’s Office, in 1991 thru 1993. In 1993 he moved to the Anderson County Sheriff’s Office, as a Patrol Officer until 2000. He began his career at the Alcoa Police Department in 2000 as a Patrol Officer. Since 2000 he has worked as a Field Training Officer, Field Training Supervisor Patrol Shift Supervisor, Sergeant, Lieutenant - Community Services, and served as the Departmental Training Officer until his promotion to Captain in January 2020. Captain Fletcher worked with his team of School Resource Officers on developing a safety strategy for city and private schools located within the City. He received his Associate of Applied Sciences in 2009 and his Bachelor of Science in Criminal Justice, (Summa Cum Laude, 4.0 GPA) in 2013. During his career, he received numerous commendations and awards, including the Police Chief’s Commendation in 2012 and Supervisor of the Year in 2015 and 2018. Preceded in death by grandfather, Vernon Smith. Survived by wife, Christy Fletcher; daughter, Jordan Fletcher; mother, Patricia Carter; grandmother, Ruth Smith; sisters, Kelley Stoner and Adam, Kala Wagoner and DJ; nephews, Jacob and Preston; bonus daughter, Cheyenne Turnbill and husband, Jake, granddaughter, Harper Turnbill; mother-in-law and father-in-law, Gary and Kathy Walker; sister-in-law, Melissa Walker. In lieu of flowers, memorial donations may be made to Shop with a Cop BCSO, 940 East Lamar Alexander Parkway, Maryville, TN 37804. A Celebration of Life will be held at 12:00 PM Saturday, May 1, 2021 at RIO Central, 370 S. Longhollow Road, Maryville, TN 37804. Smith Funeral & Cremation Service, Maryville, 865-983-1000, www.SmithFuneralandCremation.com.

The family of Captain Keith Fletcher created this Life Tributes page to make it easy to share your memories.

Send flowers to the Fletcher family.