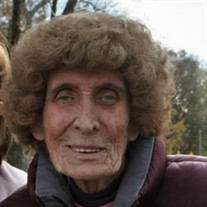 Audie Marie Hurst was born in Richard City, TN on November 10, 1918 and went to her heavenly home on Sunday, May 24, 2020. For a couple of months after her 101st. birthday she was still going out to eat and to the Dollar General store in Townsend with family members. Everyone knew her as "Nana" around Townsend and in Big Valley where she lived on her own until she went to Asbury Place in Maryville this past March. Nana was a natural born retail manager for over 45 years. She spent 28 years at May Co. in Cleveland OH and then tried to retire for about 5 years, didn't like retirement at all, so she became the manager of the girl's department at Walmart in Winter Haven, FL. for the next 17 years. She wanted to continue working full time, so she taught herself how to drive at the age of 72 when her husband Paul "Papa" Hurst passed away after 53 years of marriage. When she wasn't working, she enjoyed playing Bingo with her friends and when at home she always had a deck of cards out playing Solitaire. We finally talked her into moving up here when she was 86 years old so that we could take care of her. Instead she took care of us and continued her management skills as the matriarch of the family. She drove until she was 95 and helped out her son and daughter in law Bob & Barb Hurst of Townsend with their two businesses. She attended Victory Baptist Church until she moved to Townsend. Besides her husband Paul, she is preceded in death by her daughter Pauline Kepes; Grandson Scott Kepes; Brothers: Otis, Roy, James, Arlie (Jesse), Joe (Mary), Paul (Dorothy) and Roy Ledbetter; Sisters: Hassie (Jim), Alice, Daisy (Kenneth)Harvel and a niece raised as a sister Jamie "Snookie" Scott. Besides her son and daughter in law Bob & Barb Hurst, she is survived by her granddaughter Kim Mertins and her husband Ernie, who Nana considered her own grandson; great granddaughter Kaylie Mertins; Close friend that she adopted as a grandson Lee Allen, and wonderful nieces and a great nephew that has always kept in contact with her. We will be holding a private celebration of life at a later date. Smith Funeral & Cremation Service, Maryville, 865-983-1000, www.SmithFuneralandCremation.com.

Audie Marie Hurst was born in Richard City, TN on November 10, 1918 and went to her heavenly home on Sunday, May 24, 2020. For a couple of months after her 101st. birthday she was still going out to eat and to the Dollar General store in Townsend... View Obituary & Service Information

The family of Audie Marie Hurst created this Life Tributes page to make it easy to share your memories.

Send flowers to the Hurst family.