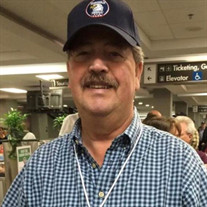 Arnold J. Russell, 71, Maryville, TN, passed away with his wife and daughters at the bedside on April 3, 2020. He was born on February 28th, 1949 in Goin, TN to Curtis and Francie McGeorge. Arnold is survived by his loving wife Clydene Russell daughters and sons-in-law, Jamie Russell-Bell, Megan & Jonathan Bledsoe and Michelle and Ryan Hairell; grandchildren, Miles Russell-Bell, Paisley Hairell, Ryleigh Bledsoe, Noah Bledsoe and a grandchild in heaven; siblings Earl Russell, Linda Johnson, Brenda McPhetridge and Carson (Moss) Russell: many nieces and nephews and great-nieces and great-nephews. Preceeded in death by both parents and siblings Wayne Russell and Wanda Collinsworth. Arnold served in the Vietnam war, spending eleven months in the jungle. He survived malaria twice and received a purple heart of honor. He has always been a hero to his family. He also served in the Navy for a short term in the 1980s, living aboard the USS Nimitz. He retired from DENSO Manufacturing at age 70 to spend more time with his loving wife who referred to him as “fluff”. They spent the last year inseparable, spending the days loving on the grandbabies, taking road trips and loving life. He loved nature, antiquing, watching westerns, and was an avid deer hunter and fisherman. Arnold was a great storyteller, a perfectionist, highly competitive, a hot pepper lover and incredibly private. His family loved listening to, laughing at and sometimes questioning those “big fish” stories. His tough demeaner well known by his daughters shifted with his grandchildren and he became known as the “marshmallow man”, teaching them wrestling moves, how to be tough and lovingly them fiercely. He took advantage of any teaching opportunities for his children and grandchildren sharing his wisdom freely. His biggest gift to his daughters was teaching them independence and an incredibly strong work ethic. He prepared us for life. Arnold was a man of strong faith and a trusted member of Outreach Church, serving as a trustee and the Sunday School Director. He was highly esteemed and well respected among his church family. He loved his morning prayer on the porch with a cup of coffee and his bible. Arnold was a prayer warrior. His family will miss his steadfast faith, truth-telling nature and his infectious laugh. A private service will be held for the immediately family only and a public memorial will be held at a later date. Smith Funeral & Cremation Service, Maryville, 865-983-1000, www.SmithFuneralandCremation.com.

Arnold J. Russell, 71, Maryville, TN, passed away with his wife and daughters at the bedside on April 3, 2020. He was born on February 28th, 1949 in Goin, TN to Curtis and Francie McGeorge. Arnold is survived by his loving wife Clydene Russell... View Obituary & Service Information

The family of Arnold Russell created this Life Tributes page to make it easy to share your memories.

Send flowers to the Russell family.