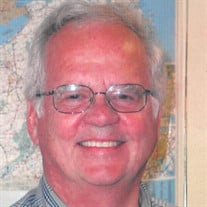 Alan Glenn Beavers passed into the loving arms of his Lord and Savior, Sunday, July 25, 2021. Alan was born March 6, 1946, in Davenport, Iowa, the only child of Glenn and Carma Beavers, who preceded him in death. He graduated from Davenport Central High School the class of 1964 and subsequently graduated from Iowa State University. He was active in the Theta Chi Fraternity while at Iowa State. This association provided a lifetime of treasured friendships. He served as an Armor officer in the United States Army in Germany from 1970 until 1972. He began his career in industrial management at International Harvester, Farmall Plant where he met his wife and lifelong partner, Mary. It was there he got into Labor/Employee Relations management, which marked his subsequent career; serving as Labor Relations Manager for RCA in Lancaster, PA and Human Resources Director for the Pfaltzgraff Co. in York, PA. During his semi-retirement, he drove a school bus and tour motor coaches throughout the eastern United States and Canada. During his 40 years in Lancaster, he became an Elder and served in numerous capacities at Wayside Presbyterian Church. Having studied piano since the age of 7, he was a jazz lover all his life and played in two ensembles during his early 70’s. Other interests included golf, woodworking, and boating. In 2020, he and Mary moved to a newly built prairie style home (he was a Frank Lloyd Wright fan) in East Tennessee within sight of the Smokey Mountains. He is survived by his beloved wife, Mary; sons, Christopher (Nicki); grandsons, Charlie and Owen of Chicago; Jonathan (Carmen) and grandchildren, Ben, Sam and Vivian of Tampa. In keeping with his wish to end where he began, interment will be in Memorial Park, Davenport, Iowa. Family and friends will assemble at 11:00 AM for graveside service at Davenport Memorial Park, 1022 E. 29th Street, Davenport, IA 52807. Family will receive friends at 10:00 AM Saturday, August 7, 2021, at Wayside Presbyterian Church, 600 Stoney Battery Road, Landisville, PA 17538. A memorial service will be held at 11:00 AM following visitation with Dr. Steve Fritz officiating. In lieu of flowers, memorials may be made to Wayside Presbyterian, 600 Stony Battery Road, Landisville, PA 17538 or Theta Chi Fraternity, P.O. Box 503 Carmel, In. 46082. Smith Funeral & Cremation Service, Maryville, 865-983-1000, www.SmithFuneralandCremation.com.

Alan Glenn Beavers passed into the loving arms of his Lord and Savior, Sunday, July 25, 2021. Alan was born March 6, 1946, in Davenport, Iowa, the only child of Glenn and Carma Beavers, who preceded him in death. He graduated from Davenport... View Obituary & Service Information

The family of Alan Glenn Beavers created this Life Tributes page to make it easy to share your memories.

Alan Glenn Beavers passed into the loving arms of his Lord and...

Send flowers to the Beavers family.