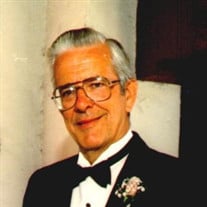 On Tuesday, April 20, 2021, his 95th birthday, Adolph Krams Jr ascended the Stairway to Heaven and was reunited with the love of his life, Marion Caroline Krams. Born in Newark, New Jersey on April 20, 1926 to Adolph & Verna Krams, he enjoyed a full and blessed life. In 1939 he moved to Mineola, NY and met Marion when they were 14 years old. He knew immediately that she was “the one”. They married on September 18, 1948 and built a life of love, caring and service to others for 64 years. Together they raised 4 children who surrounded Adolph at the time of his death in Knoxville, TN. Children include Esther (Ken) Johnson, Maryville, TN; Mark (Suzanne) Krams, Springfield, Ohio; Donald (Sharon) Krams, Powell, TN, and Charles “Chuck” (Liz) Krams, Connecticut. Adolph is survived by his sister, Virginia “Ginny” Reed of Gloucester, Virginia, Cousin Lorna Graham of Ohio, many nieces, nephews, 12 grandchildren and 21 great grandchildren. Adolph graduated Mineola High School in 1944 and entered the US Navy during World War II serving as a Seaman First Class, in Seal Beach, California and on board the USS Macon in the Atlantic on the first post war peacetime maneuvers. He was Honorably discharged in August 1946. Adolph was employed by the Long Island Lighting Company (LILCO) for 39 years and retired as Office Manager for the Northport Power Plant in 1988. He was a member of the Mineola Presbyterian Church serving as an Elder and Deacon for many years. During their life together Adolph & Marion enjoyed camping and traveling in their converted camper van which Adolph designed. They visited all 50 states in the USA, vast areas of Canada, and imparted a love of travel and adventure to their children. Adolph was an avid photographer and Marion narrated audio tapes of their travel adventures. Adolph was also a storyteller and as he reached the end of his life, he received great joy in sharing his life stories with those who cared for him. He was most proud of 2 home projects he completed during his lifetime, the shingling of his Mineola home using cedar shake shingles he had shipped from Washington state to New York and the design and renovation of the lower level of their retirement home in Etowah, NC, where they resided from 1990 to 2008. During their retirement years in Etowah, NC they were active members of the Etowah Presbyterian Church, where Adolph served as an Elder. Adolph enjoyed woodworking and when his children were young, he built each of them a model sailboat that they raced in Junior regattas. Adolph and Marion moved to Springfield, Ohio in 2008 and lived at the Ohio Masonic Home. After the death of his beloved Marion in 2011 Adolph took up woodturning and created beautiful bowls, cups, Christmas ornaments and miniature birdhouses. In November 2020 he moved to Knoxville, TN. Adolph wanted to be remembered as a caring and compassionate man who held dear remembering and serving others. His Service was through organizations such as the Masons, Shriners, and Amaranth. He became a Master Mason in 1980 and joined the Order of the Eastern Star where they worked together serving their communities. After retiring to Etowah, NC Adolph & Marion joined the Hendersonville Shrine club in 1990 where Adolph was continually active working on the annual auction, serving as Chairman for 3 years and serving on the Board of Directors. He also enjoyed volunteering for the Shrine Paper Crusade as area Captain. Adolph was initiated into the Order of the Amaranth in 1990 in Hendersonville, NC where he served as Associate Patron, and as Royal Patron in 1993. Together Marion and Adolph served as Royal Matron & Royal Patron in 1996. Adolph continued to serve as Grand Royal Patron for the state of North Carolina from 1999 to 2008, with Marion at his side serving as Grand Marshall from 2001 – 2002. His last great joy in life was taking a Dream Flight with Ageless Aviation Dreams Foundation as a WW II veteran. On August 23, 2019 he jumped aboard a restored 1940 Boeing Stearman biplane to fly over the farm fields of Central Oho on his “flight of a lifetime”. He often said that was the second-best day of his life, with the best being his wedding day. Adolph was also presented a Quilt of Valor in November 2020 for his service to the US Navy. His family would like to thank the staff of Sherill Hills Retirement Community, All Best Care private caregiver Julio Caraballo, Morning Pointe Assisted Living Communities of Knoxville, Brenda Muzyngo, RNP, UT Home Health Care, Smokey Mountain Hospice, and Elder Law of East Tennessee for the loving care and expert services they provided. Special heartfelt thanks go to Kathy Sanscrainte, lifelong friend and “second daughter”, for her caregiving and support. The family requests donations to be directed to Adolph’s designated charities Amaranth Diabetes Research Fund, The Masonic Home Benevolent Endowment Fund, Shriners Children’s Hospital, or the hospice of your choice. Smith Funeral & Cremation Service, Maryville, 865-983-1000, www.SmithFuneralandCremation.com.

On Tuesday, April 20, 2021, his 95th birthday, Adolph Krams Jr ascended the Stairway to Heaven and was reunited with the love of his life, Marion Caroline Krams. Born in Newark, New Jersey on April 20, 1926 to Adolph & Verna Krams, he enjoyed... View Obituary & Service Information

The family of Adolph Krams Jr. created this Life Tributes page to make it easy to share your memories.

Send flowers to the Krams family.